Cheapest Ways to Send Money to Tanzania from the UK

Tanzania has thousands of people living abroad who send millions of dollars home every year. According to the ministry of finance, these people send home more than $464 million every year. That is a substantial figure that is less than 1% of the country’s GDP. Still, this amount is less than what countries like Kenya, Uganda, and South Sudan receive every year. In this article, we will look at the cheapest ways to send money to Tanzania from the UK.

Number of Tanzanians living in the UK

Tanzania, however, receives less money than other comparable remittances because of its smaller population that lives abroad. While the number is not yet well-known, it is estimated that there are more than 100,000 Tanzanians living in the UK.

Recipients also receive the funds within a short time, which is unlike other traditional payment platforms. On average, it is usually 8 times cheaper to send money using TransferWise than other payment services.

There are other benefits of using TransferWise when you are sending money to Tanzania from the UK. For example, it is an easy process, the company uses the real exchange rate, you can send the funds across several currencies, and the customer can receive the funds within minutes. The image below shows that the customer will receive Sh. 2,980,001 if you send £1,000. Your fee will be £18.28

WorldRemit is another fast-growing money transfer company that is headquartered in London. The company helps customers from around the world send money to more than 100 countries. It has raised more than $400 million from investors and is currently valued at more than $1 billion.

The company works in a relatively similar way to TransferWise. It boasts of the exchange rate it offers and the speed it does the transactions. Another added feature is that WorldRemit has pickup locations in most countries. This means that recipients who don’t have a smart phone or a bank account can easily collect their funds. It also has an airtime feature that enables people living abroad to buy airtime to people living in Tanzania.

The process of sending money using WorldRemit is very simple. Just visit the website, create an account, add the amount you want to send, fill the recipient’s details and then continue. You also need to select the options that the customer will use. These options are mobile money to Tigo Pesa, Vodacom M-Pesa and Zantel Ezy Pesa accounts, bank deposit and cash pick up. 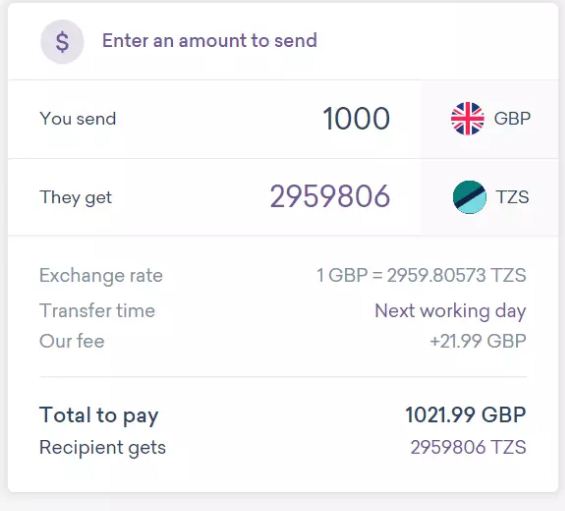 Send money with WorldRemit using the code 3FREE and pay no fees on your first three money transfers.You will also receive a discount voucher for use in your next transaction when you refer a friend via your referral code. Other codes that you can also use are TRACE, NOLLYWOOD, APLUS, TFC, GMA, ASAP, Jollibee1, Jollibee2, Jollibee3, Jollibee4, WRBEE, EVENTS, CIMB.

Western Union is one of the oldest money transfer company that was started in 1851. Today, the company is valued at more than $9 billion and is present in most countries. The company has partnered with many banks, who act as their local agents. This makes its services accessible in some of the most remote parts of the world.

Western Union is a popular option when you want to send money to Tanzania from the UK. This is partly because most people in the country are not yet aware of the new options like TransferWise. To use Western Union, especially during this Covid-19 period, you need to use the company’s online platforms. The image below shows that the client will receive sh 3,000,000 if you send £1,000. Your fee will be £2.90.

Ria is a money transfer company that is owned by Xe. The company was started in 1987 in the United States and has grown to become one of the fastest growing firms in the industry. The company enables people to send money to more than 100 countries including Tanzania. Customers can get its services either from one of its many partnering branches or from its online platform. The image below shows that the customer will receive Sh.2940680.53 when they send £1,000 to Tanzania using Ria.

Final Thoughts on Money Transfer to Tanzania from the UK

Tanzania is a very open country, meaning that there are many payment options. We believe that these options are the most cost-effective and faster methods for you to send money to Tanzania from the UK. Still, there are other options that you can try, which include PayPal, Xoom, OfX, and MoneyGram among others.

Countries you can use this service with:

We are a team of financial researchers from Africa, Europe and the United States. Our mission is to provide quality information about reliable ways to transfer money to, from and through Africa. We supply information on the services available, the countries applicable, as well as how to open virtual bank accounts, instant money transfers and transfer money worldwide.